During the Russian occupation, offices were looted, equipment destroyed, employees injured and parts of the reserve became minefields.  As a result, it may be a long time before scientists can continue their research on this unique protected area.  How important is this reserve and how has the war affected it?

A place where nature is restored

The Chernobyl Radiation and Ecological Biosphere Reserve is the youngest and largest reserve in Ukraine. Located within the Exclusion Zone and the Unconditional, or Mandatory, Resettlement Zone, the reserve is an unusual combination of protected area and site of the largest radiation accident at a civilian nuclear facility.

With economic activity absent from the area, Polesia’s wild-nature has returned.  It is home to emblematic European forest species including lynx, wolf, elk, red deer, wild boar, owl and white-tailed eagle. A total of around 400 vertebrate species. Its large area, more than 2,000 km2, has diverse landscapes, which in turn support a wide variety of biodiversity.

In general, the reserve does not differ from other Ukrainian reserves in terms of its objectives and functions. However, there is one huge difference – the presence of radiation pollution. This creates unique conditions for radioecological and radiobiological research – ie for looking at the impacts of radiation on ecology and on people.

The main focus of the reserve’s scientific research is to study the impacts on nature over time, but in cooperation with partners the reserve is also implementing a number of projects. For example, in cooperation with the Frankfurt Zoological Society camera-trap monitoring of large animals and lynx. Together with WWF-Ukraine restoration of bison populations. And with Japanese colleagues from Fukushima University, studying the effects on rodents [or mice and rats] in exclusion zone “hot spots”.

Losses due to occupation

For more than a month, the reserve was occupied by Russian troops. At the moment, it is difficult to assess all the consequences of the occupation. The offices of the Chernobyl Reserve have been looted and some equipment lost.  The occupiers built engineering structures and destroyed some of the reserve’s infrastructure. Many of the reserve’s personnel have been affected one way or another – by occupation, hostilities or evacuation. Three staff were wounded. 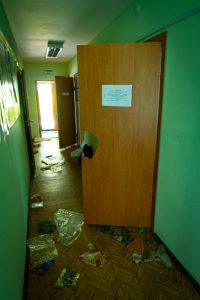 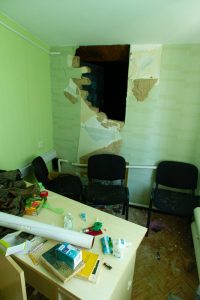 Now the reserve must be cleared of mines before the scientific research can restart.

How war affects biodiversity: story of birds on Kryva Kosa

War destroys ordinary lives – of people and also of animals. It’s currently hard to assess the loss of biodiversity in Ukraine, this will need careful research after the war ends.  However, the losses of bird colonies caused by the smaller military actions in 2015 indicate what might happen.  After the of creation Meotyda National […]